Between working on commercials, a few of the guys at Rushes & I had an idea to make a video of me ‘solving’ Rubik’s Cubes while juggling them. We’d seen a guy called Ravi Fernando on YouTube do this for real. It takes him about 6 minutes solving one at a time. We decided to do our own version but push it a bit further by doing it way quicker and in a more complicated juggling pattern. Seemed like a good bit of fun.

First, I purchased some really cheap knock offs from eBay. These ‘Rubix’ cubes (advertised as speed cubes) did not even turn without a lot of effort. I’m fairly sure I’m the only person to ever receive these cubes and not immediately send them back for a refund. Fortunately, we did not intend to turn these cubes at all, so they were entirely suitable for our purposes.

Somebody had told me once that it is possible to solve a Rubik’s cube from any position in 20 moves. As I was juggling 3, we decided that I needed to do at least 60 catches to make the video semi-plausible. We shot the video on the roof deck at Rushes and decided to frame in the Rushes logo in the background as a clue that all was not as it seemed. Although this clue was ignored by most of the people that eventually watched the video.

Our CG department were busy on actual jobs, so we built a CG model of a Rubik’s cube in Flame and scrambled it up one twist for every catch that I had made. The colours were then shuffled for each of the 3 cubes so that each one appeared different (although the solve algorithm remained the same on each one). From these models we then figured out what the faces would need to look like on each cube at the start of the video when I show the cubes to the camera to demonstrate that they are shuffled. We then scrambled up the real cubes to match the CG models and shot stills of these cubes in the same lighting conditions for each of the positions where my hands aren’t moving. These stills were then tracked on top of the shot plate of the unscrambled cubes and we faded between each still during the moments when the cubes were motion blurred.

We used a different technique for the part of the video where I start juggling and the cubes need to start solving. For this section we tracked in the CG models of the cubes and animated them to match the movement of the cubes we shot with. They were animated to gradually solve each time they were in my hands. Fortunately, due to the motion blur on the actual footage, you couldn’t see a lot of my fingers whilst my hands were in motion, so we didn’t have to do much work on the fingers themselves. Just a few frames here and there. Comments were even made between us at this stage like “This is so pointless” & “Nobody is going to watch this frame by frame”. We had no idea the level of scrutiny that the video would eventually have to endure from the “cubing community”.

The drawback of the motion blur in the shot footage on the other hand was that just placing new CG cubes in front of the shot ones was not enough to cover them entirely, so we had to paint out the original cubes frame by frame. (About 500 frames in all). This was by far the most time consuming task, and was taken on by Rich Russell, Lorenzo Newell & James Dooley. During this process, we were pleased with my decision to wear a plain black jumper that day, but less thrilled with the decision to film in front of a complicated background of overlapping railings and windows which was pretty much different on each frame. Rich said halfway through the painting process: “Next time we have the idea to do a thing like this, can we just not!”

Finishing touches included rotoscoping my fingers back in front of the composited cubes & adding believable shadows, reflections and lighting to the surfaces. I then recorded the sound from an actual Rubik’s Cube being solved and added this twisting noise to the video each time our CG model moved.

I had a Youtube channel already that I never used. We thought it best to not upload to a new channel. I changed my name from leowestonvfx to RuboCubo & had spent the few days before this deleting anything VFX related and liking and sharing videos of juggling and Rubik’s cube solves. I also for a laugh posted a comment on Ravi’s video saying “I think I can beat this”.

Then we posted the video.

Nothing happened obviously. I had no subscribers on my channel. I shared it to Facebook amongst my friends and got a couple of likes. Most of my friends knowing what I do for a living saw it for the sham that it was and weren’t afraid to say it in the comments.

The next day we posted it to Reddit. Harder than you think. You need a “Karma score” to post to the main videos page of Reddit which you earn over time by being an active & engaged user of the site. None of us filled this criteria. We then discovered that our head runner at Rushes was pretty active on Reddit so got him to post the video (3pm UK time – when America awakes – is apparently the best time to post). Then it started getting quite a few views and comments. Although nearing the end of the day I think we worked out we’d probably had about one view per hour of work invested in the video. Not such a good ratio. However one comment came from a journalist at Metro who had seen it on Reddit and asked if he could feature the video on their site. We obviously said yes. When I went to bed the video had about 500 views which I thought was pretty good going for the first 24 hours. I hoped that by the time I woke up we might have a thousand.

I woke up and checked the views on my phone in bed and it had 18,000 views! I thought this was pretty spectacular. Couldn’t wait to show the guys at work. By the time I got to work an hour later the views had doubled to 36,000. By 10am I had an email from a journalist at Buzzfeed asking for an interview about how I felt that the video was trending on Twitter in Japan. He included a link to the tweet. We clicked it and it linked to a gif that somebody had made of the video and tweeted. It had been liked and retweeted over 40,000 times and every time we refreshed the page it was gaining another thousand.

After that, it appeared on The Telegraph, then The Mirror, and The Sun. The messages on the Youtube channel were filling up with requests to post the video to various sites and feature on various TV stations. Fox News, ABC News, Fuji TV in Japan, Discovery Canada, The New York Post, Huffington, LadBible, Unilad etc. I obviously just said yes to everyone. I tried to answer all their questions while avoiding divulging whether or not the video was real or fake.

I think that we realised that we had actually “gone viral” when the video became the number 1 trending thing worldwide on Reddit (albeit a gif repost). So funny! 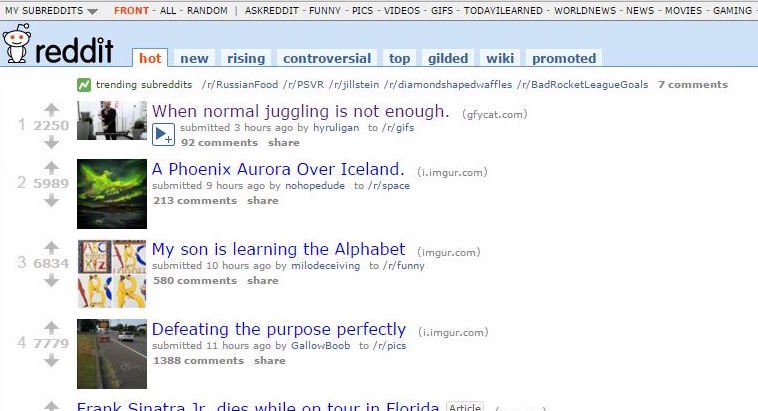 The point at which we shit our pants a bit was when Reuters got in touch wanting to push the video to every News network worldwide and directly asked: “Is the video ‘as shot’?”. We decided that we shouldn’t lie directly to Reuters, and avoiding the question was as good as a confession, so we ignored the email.

Over the following 48 hours across all the sites that we allowed to repost, the video got in excess of 20 million views.

It seems like lots of people believed the video was real (38% according to the Telegraph poll). But the best thing for us from a visual effects perspective was that even the ones who thought it was fake didn’t suspect CG. Theories ranged from reversed video, prearranged cubes, swapping in cubes near the end, self solving cubes etc. Probably Definitely the best endorsement of my compositing I have ever received!

Most of those who cried “fakery” took the video in the spirit in which it was intended – as a bit of fun. I suspect though, if you’re sat at home investing all of your time into trying to legitimately beat some kind of Rubik’s Cube solving record, and then some guy pops up on YouTube and undeservedly gets all the credit, then you could be forgiven for writing “Kill yerself” on the comments… possibly.

Happily though, since we revealed the illusion, I’ve received only positive feedback. Although one Japanese journalist did email me asking how I could have lied to him.

The thing that made me most happy is that Steve Mills himself – the inventor of ‘Mills Mess’ (The juggling pattern I’m doing in the video) got in touch to say how much he enjoyed the video!

We really enjoyed the 20 seconds of internet stardom we had, and are mainly happy that the hours we spent making the video weren’t a complete waste of time.

Once again, massive credit to Rich Russell, Lorenzo Newell & James Dooley for the time they spent with me making the video. And also to our PR guy Thom Trigger who had to deal with the shitstorm of press enquiries.

Below is a collection of some of the press the video got: 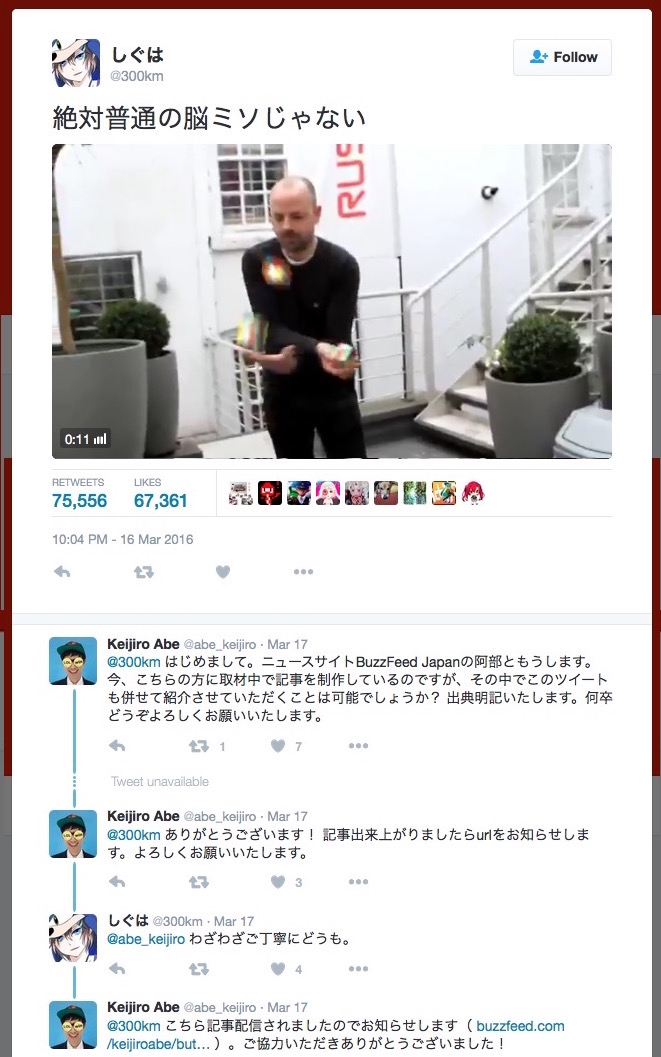 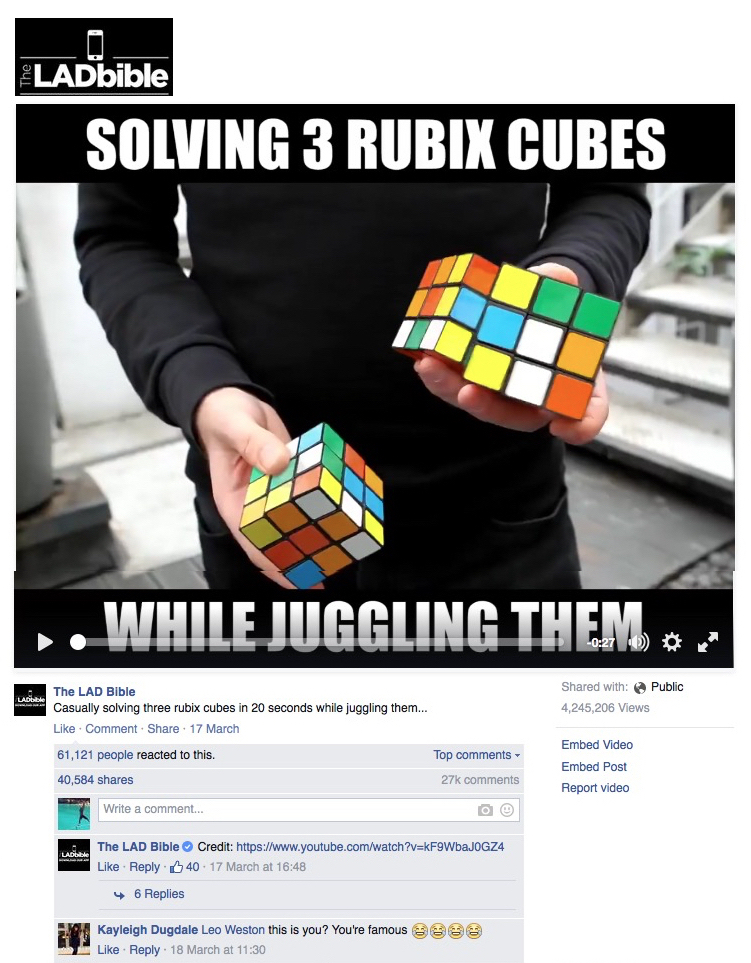 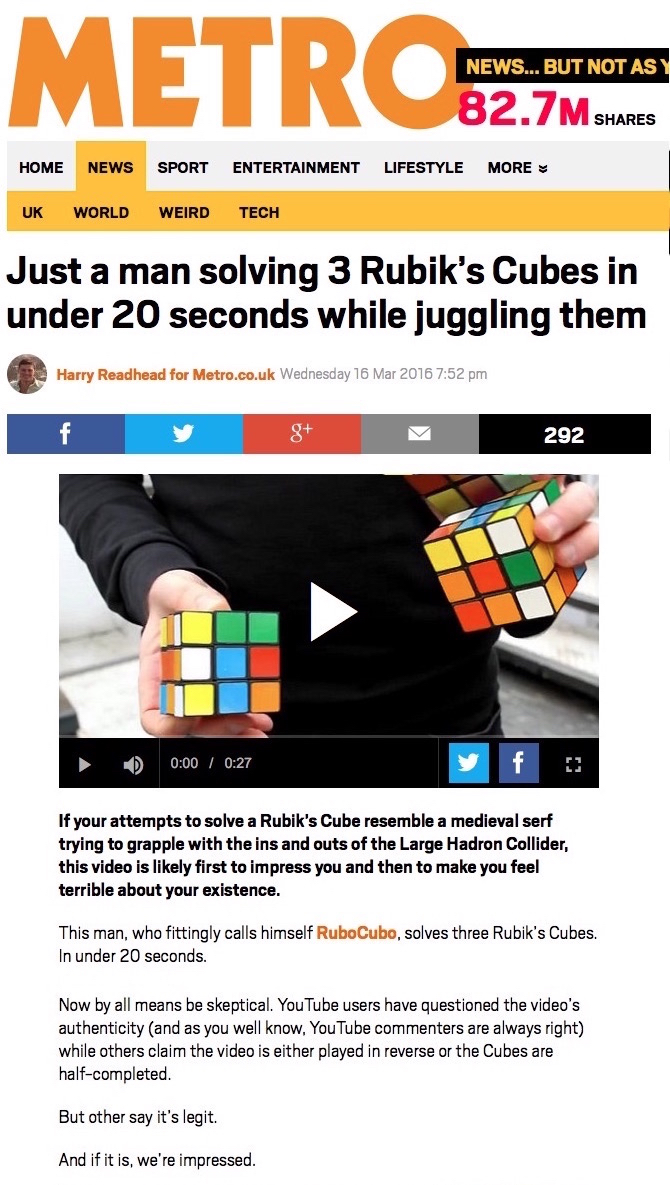 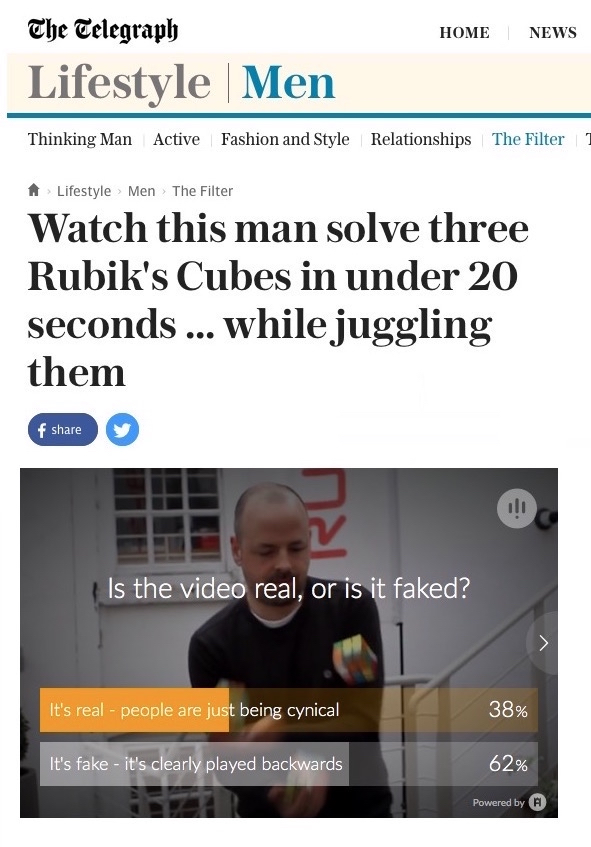 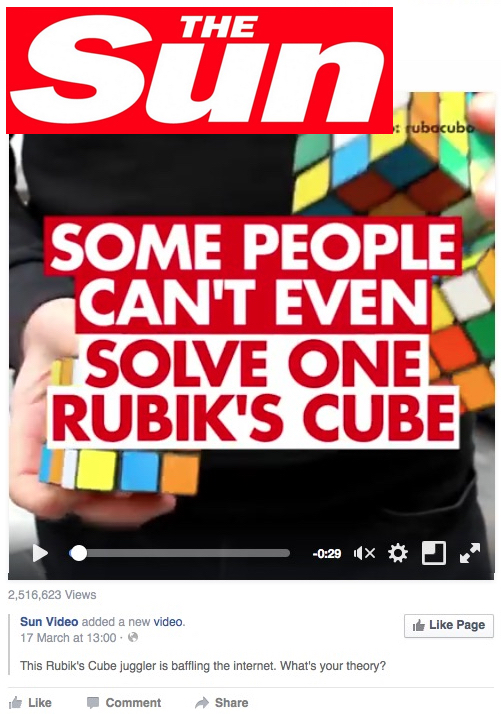 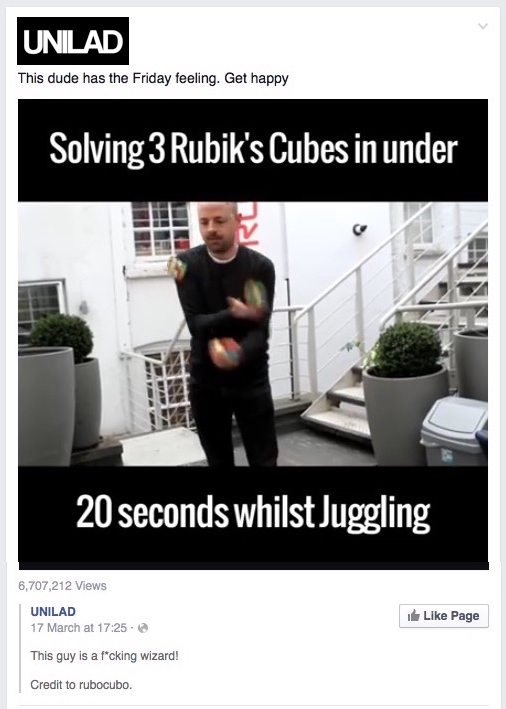 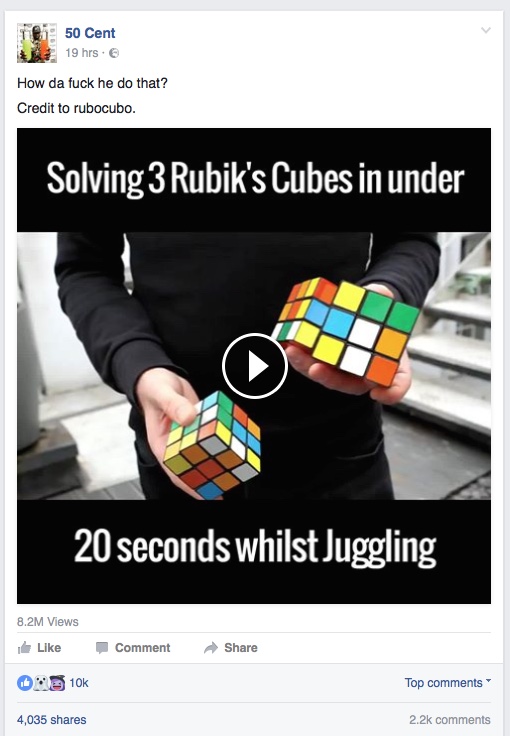 On a random web show in the U.S.

Here’s a breakdown of how we made the video: 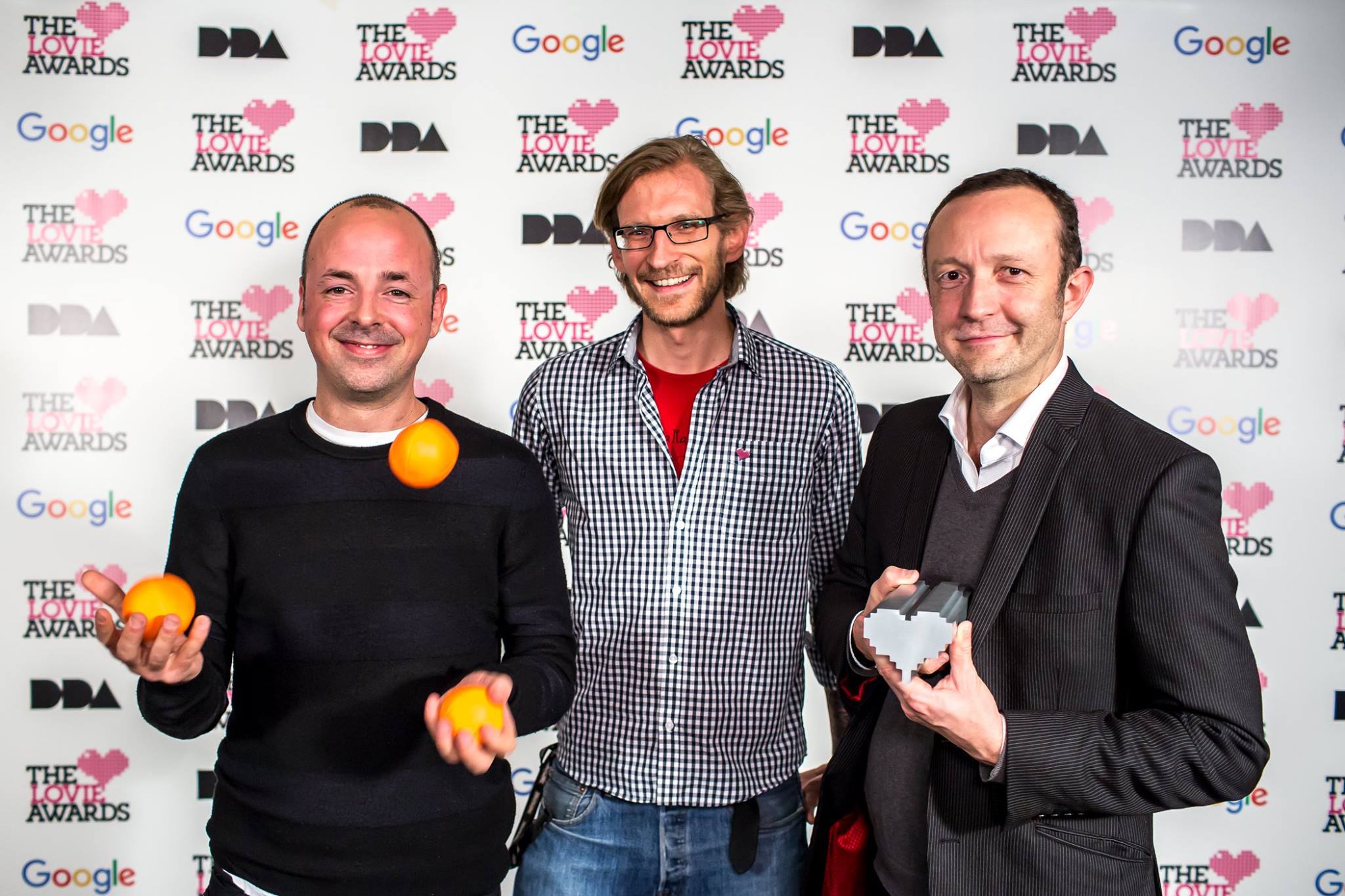